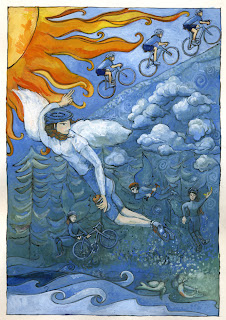 This painting was an uphill climb for me. I'm still not satisfied with it, but two months is enough floundering so I'm backing off, calling it done -- for now. 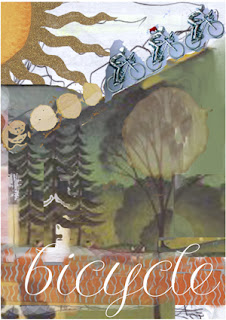 After a pencil thumbnail I put together this digital sketch. 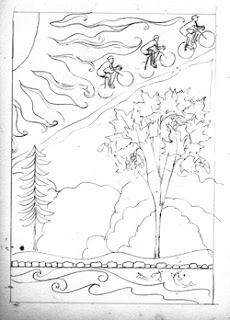 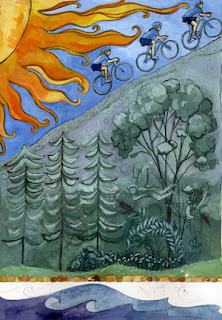 My 10-year-old niece encouraged me to not give up, but I really didn't like how the greenery was going. I started adding angels. 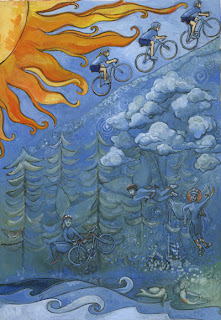 Something substantial happened in the weeks between the green version above and this cloudy blue development. I'll never get the hang of painting trees.
I felt like there was a huge lack of focus in this version. Thus, the large angel was added (see image at the top of this blog) -- a surprise to the design undoubtedly. I'll let you know when this painting comes out of storage and back on the drawing board.

Posted by Lorraine at 4:32 AM No comments:

A Blessing on Your Bike 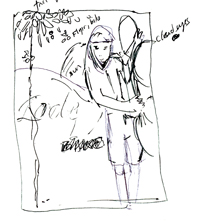 Up at 4, can't sleep. The drawing board.

The design was thumbnailed weeks ago.

The digital sketch done days ago. (I love being able to lay out the sketch in PhotoShop. I used to use layers of tracing paper to adjust a drawing but PS refines faster.) 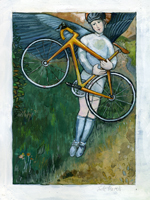 I was nervous about this painting. My experience is with little light designs; my intention here was to paint with gouache, heavy coverage. To ensure I painted heavily I used watercolor paper that already had a coverage of paint on it (an earlier, unsuccessful project.)

Still looking at Chagal and a few children's books for illustration inspiration. 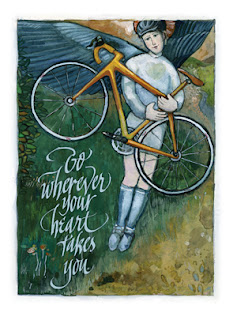 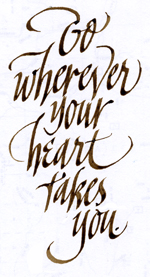 Somehow things don't feel complete without calligraphy so I did the calligraphy on a separate paper and overlaid it in PhotoShop.

This painting is now printed on a little gift card (2.5 x 3.5 inches). I was worried that the greens would print muddy in CMYK but the print operator let me work with him while it was on press. He did a great job and it came out well.

Send me a note and I'll mail one to you FREE. 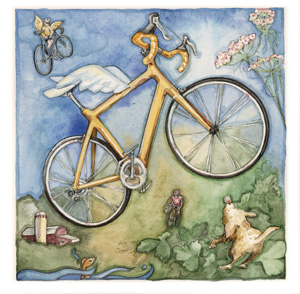 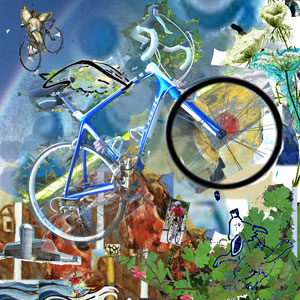 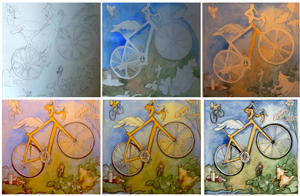 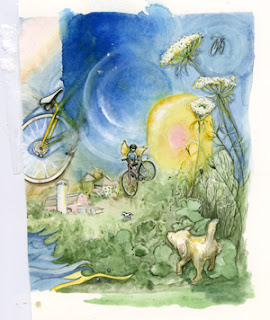 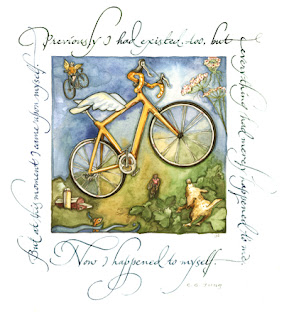 More bike art to come!
Posted by Lorraine at 10:34 AM No comments: